"They (the 'insurgents') have no idea what's coming (to Falluja). Hell's Coming! "

"The enemy has got a face, He's called Satan. He's in Falluja and we're going to destroy him."

"This is as pure of fight of good versus evil as we will probably experience during our lifetimes."

"This attack will obviously breach the laws of war and the Geneva Convention.. the message the siege of Falluja sends is brutally simple: resist us and we will destroy you. It is the same message that the Wehrmacht sent in Warsaw in 1944, and the Russian Army in Grozny in 1999."

As the American military sits poised to wipe the city of Falluja from the face of the earth, there can no longer be any doubt that the US government is actually waging a crusade, a holy war in the name of it's people, in the name of Jesus and the christian God. For a long time I refused to believe that this was true, but the US Election last week has proved to me that this is so. With the huge turn out of fundamentalist Christians and born agains voting for George Bush, it's painfully obvious where they are coming from - as the quotes above prove. 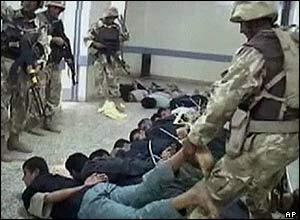 A photo in the paper last weekend showed hundreds of US Marines, lined up saying prayers on the eve of the assualt on Falluja, anyone seeing that picture can have no doubt about what's to come. Unless there is a miracle, the city of Falluja is doomed, the US military will reduce it to rubble, and they will achieve nothing - for every supposed 'terrorist' or 'insurgent' that they kill, a hundred more will spring up to take their place,filled with hate and the thirst for revenge. The USA is laying the foundation for a conflict that could last a hundred years, but definitely won't be resolved in my lifetime.

What has happened to them? Have they all gone insane? The US Military say that they are letting women and children leave the city, but all men aged between 15 and 50 are banned from entering or leaving.. even if they are currently against fighting, they will have to join with the suspected 2000 'insurgents' simply to protect themselves from the assault. Yet again the US will openly disregard the rules of the Geneva Convention, by indiscriminate bombing of civilians, the wholesale destruction of homes and the entire civilian infrastructure, what do they hope to achieve by this madness?

Supposedly the suppression of this town will clear the way to democratic elections in January, according to Iraqi President Allawi, the American stooge who was recently rumoured to have executed two bound prisoners, by shooting them in the back of the head. But as the song goes "You can bomb the world to pieces, but you can't bomb it into peace."

No, if we're honest with ourselves, the US is not looking for peace, it's looking for a way to assert it's "moral superiority" over the "heathens", because they worship the "wrong god". Whilst they're at it they might as well help themselves to Iraqi oil, what's good for Texas is good for the Bushes and Halliburton, what's good for the military is good for the arms suppliers and the Carlyle Group (inc. Bush snr.). War feeds the economy, and if you have to keep that war going because you are unable to pin down your original enemy, Usama Bin Laden, then all the better. And if it costs the lives of 1,200 American soldiers every 18 months, then who cares, there's plenty more where they came from, in the South and Mid-West, and the people who live in those states are still going to vote for you anyway.

Why? It's easy - George Bush is a Christian and he doesn't want those damn homosexuals to be able to get married either! Well after all that's the most important thing in this world, is it not?

Meanwhile, the city of Falluja is about to be pounded into dust, and there's not a single thing that any one of us can do about it. Not even God, somebody else has bought out his franchise.

Thank you!
My homepage | Please visit